We have (H-Power) lift off! 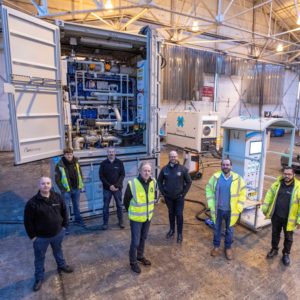 I’m delighted that we have completed our bespoke zero-emissions power generator for Extreme E, a huge milestone for the AFC Energy business.  It gave me immense pride to show their Engineering team round the completed system and for it to pass their scrutiny in mid-January.  Following final checks, we’ll be handing it over to their team at the end of this week for a range of media appearances, prior to it being placed on the St Helena for distribution ahead of the Championship’s first race. You can see a video of the completed unit here.

Our core team have worked flat-out alongside Extreme E and supply partners  to design and build an effective system that can withstand the harsh environmental conditions found in the Arctic, Amazon Rainforest, Sahara Desert and the heights of Tierra del Fuego in Argentina.  Whilst the system was completed last year, there has been long hours (including weekends and over Christmas!) to complete the intensive system testing and commissioning required before handover, and I thank all of our team for their tremendous efforts in getting to this point.

The profile of this series will be hugely important in promoting our technology as a serious off-grid alternative to diesel generators to help decarbonise wider industry.  The cast list involved with the series certainly helps, with three past F1 champions now running teams (Lewis Hamilton, Nico Rosberg and Jenson Button, with the latter also driving!) alongside WRC legends Carlos Sainz and Sebastien Loeb and rising stars including Jamie Chadwick.  I am sure that the series’ global audience of over 200 million will get value from the series!

A small number of the team will travel to the inaugural race in AlUla, Saudi Arabia on April 3rd and 4th for the Extreme E Desert X-Prix to provide technical support to ensure the system’s smooth operation.  Back at Dunsfold, our attention continues on our next system builds with Acciona and Julich and the ongoing development of our “S” Series fuel cell and Alkamem.  Stay tuned for further updates.