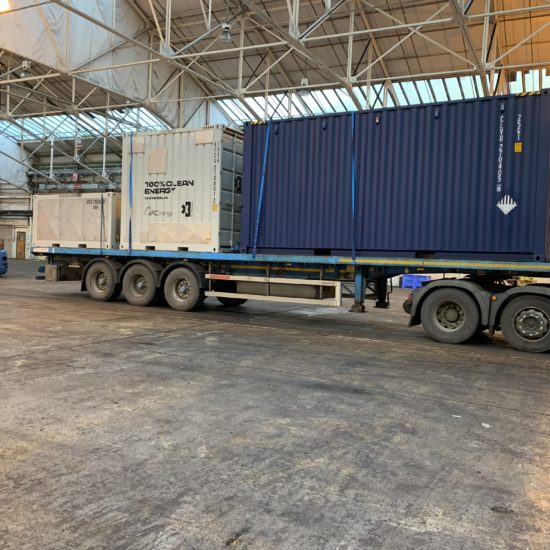 AFC Energy is pleased to confirm the dispatch and onboarding of its first commercial off-grid, hydrogen fuelled electric vehicle charger set for use in the inaugural Extreme E racing series that begins in April 2021.

Following the unveiling in January, the system was dispatched to Liverpool earlier this week where it has been loaded onto the series’ floating centrepiece, the St Helena.  This will shortly set sail for the series’ first round, the Desert X-Prix in AlUla, Saudi Arabia, on the 3rd and 4th of April, as announced by Extreme E this morning.

The AFC Energy designed and built fuel cell system will sustainably charge the Championship’s ODYSSEY 21 electric SUVs in its inaugural season of racing.  It will highlight to Extreme E’s global audience of 200 million people the vast potential for today’s newest clean power technologies to displace polluting diesel generators, to which a large quantity of worldwide greenhouse gas emissions can be attributed.

“Today we bid farewell to AFC Energy’s first commercial fuel cell system which is about to embark on a worldwide tour alongside Extreme E, showcasing how today’s hydrogen technologies can solve some of the world’s most challenging environmental predicaments of our generation.  The collaborative effort between Extreme E and AFC Energy over the past year  has seen the on-time dispatch of our hydrogen power generator which is testament to the fantastic efforts of both companies to get us to this position.

“Hydrogen’s role in supporting the global decarbonisation agenda is no longer in question.  With world class events such as Extreme E showing such leadership in its commitment to sustainable motorsport and off-grid power generation, the opportunities for AFC Energy’s fuel cell system to become the zero-emission benchmark for the powering of other major events only becomes more compelling.

“We wish Extreme E and all its partners a fantastic first season and look forwards to being there in Saudi for Desert X-Prix in a few weeks’ time.”

18 February 2021
Back to Press releases
See all news & media